The National Institute of Mental Health Highlights Ketamine for Depression

The National Institute of Mental Health (NIMH) issued a highlight on ketamine for treating depression.

The most commonly used antidepressants are largely variations on a theme; they increase the supply within synapses of a class of neurotransmitters believed to play a role in depression. While these drugs relieve depression for some, there is a weeks-long delay before they take effect, and some people with “treatment-resistant” depression do not respond at all.

The delay in effectiveness has suggested to scientists that the medication-induced changes in neurotransmitters are several steps away from processes more central to the root cause of depression. One possibility for a more proximal mechanism is glutamate, the primary excitatory, or activating, neurotransmitter in the brain. Preliminary studies suggested that inhibitors of glutamate could have antidepressant-like effects, and in a seminal clinical trial, the drug ketamine—which dampens glutamate signaling—lifted depression in as little as 2 hours in people with treatment-resistant depression.34

The discovery of rapidly acting antidepressants has transformed our expectations—we now look for treatments that will work in 6 hours rather than 6 weeks. But ketamine has some disadvantages; it has to be administered intravenously, the effects are transient, and it has side effects that require careful monitoring. However, results from clinical studies have confirmed the potential of the glutamate pathway as a target for the development of new antidepressants. Continuing research with ketamine has provided information on biomarkers that could be used to predict who will respond to treatment.35Clinical studies are also testing analogs of ketamine in an effort to develop glutamate inhibitors without ketamine’s side effects that can then be used in the clinic.36 Ketamine may also have potential for treating other mental illnesses; for example, a preliminary clinical trial reported that ketamine reduced the severity of symptoms in patients with PTSD. 37 Investigation of the role of glutamate signaling in other illnesses may provide the impetus to develop novel therapies based on this pathway. 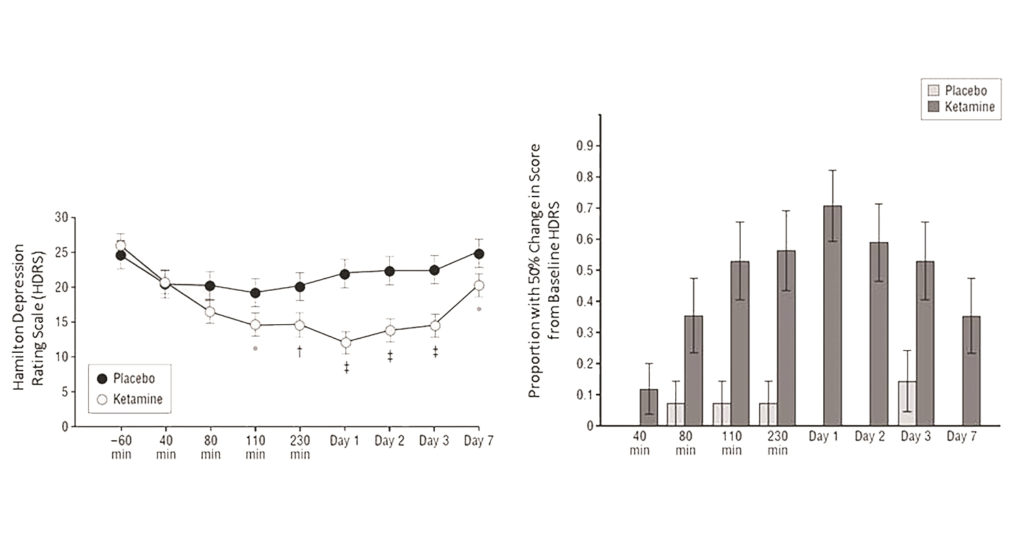 One of the imperatives of clinical research going forward will be to demonstrate whether the ability of a compound to interact with a specific brain target is related to some measurable change in brain or behavioral activity that, in turn, can be associated with relief of symptoms. In a study of ketamine’s effects in patients in the depressive phase of bipolar disorder, ketamine restored pleasure-seeking behavior independent from and ahead of its other antidepressant effects. Within 40 minutes after a single infusion of ketamine, treatment-resistant depressed bipolar disorder patients experienced a reversal of a key symptom—loss of interest in pleasurable activities—which lasted up to 14 days.38 Brain scans traced the agent’s action to boosted activity in areas at the front and deep in the right hemisphere of the brain. This approach is consistent with the NIMH’s RDoC project, which calls for the study of functions—such as the ability to seek out and experience rewards—and their related brain systems that may identify subgroups of patients with common underlying dysfunctions that cut across traditional diagnostic categories.

The ketamine story shows that in some instances, a strong and repeatable clinical outcome stemming from a hypothesis about a specific molecular target (e.g., a glutamate receptor) can open up new arenas for basic research to explain the mechanisms of treatment response; basic studies can, in turn, provide data leading to improved treatments directed at that mechanism. A continuing focus on specific mechanisms will not only provide information on the potential of test compounds as depression medications, but will also help us understand which targets in the brain are worth aiming at in the quest for new therapies.