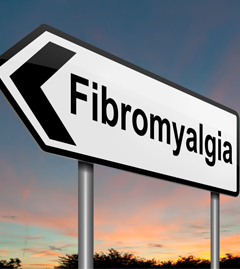 Fibromyalgia is a pain disorder characterized by chronic widespread musculoskeletal pain. It’s different from other pain disorders in that the symptoms are not restricted to pain; they are accompanied by fatigue, sleep, memory and mood issues. Researchers believe that fibromyalgia amplifies painful sensations caused by a stimulus which normally doesn’t provoke pain. This phenomenon is called allodynia and is common amongst Fibromyalgia patients.

Women are more likely to develop fibromyalgia than men. Fibromyalgia affects 3.4% of women and 0.5% of men in the United States. Patients who have fibromyalgia also commonly have tension headaches, temporomandibular joint (TMJ) disorders, irritable bowel syndrome, anxiety and depression.

The pain associated with Fibromyalgia is often described as a constant dull ache, typically arising from muscles. To be considered widespread, the pain must occur on both sides of the patient’s body and above and below your waist. Patient suffering from fibromyalgia suffer also from fatigue, sleep, memory and mood issues.

– We are proud to offer the BREAKTHROUGH IV Ketamine Treatment Therapy. This is a revolutionary way to treat Fibromyalgia and has excellent results.
Use of ketamine showed a significant reduction in pain intensity during and after the test period in fibromyalgia patients. Tenderness at tender points decreased and endurance increased significantly.
A recent patient success story:

Karen Mullins was diagnosed with Fibromyalgia after a car accident left her in severe chronic pain. Karen was one of the first patients in Dr. Hanna’s clinical study for Fibromyalgia pain utilizing IV Ketamine Infusion Therapy. Her results are extremely positive and she now has a much better quality of life.

Who is more likely to develop Fibromyalgia?

Fibromyalgia was once diagnosed based on the tender points previously mentioned. A person who complained of 11 out of the 18 tender points was thought to qualify for the diagnosis

After further studying Fibromyalgia, researchers concluded that a patient satisfies diagnostic criteria for fibromyalgia if the following 3 conditions are met:

2) Widespread pain must be present for at least 3 months

3) The patient doesn’t have a disorder that would otherwise explain the pain.

We provide a comprehensive in-office patient assessment for the diagnosis of fibromyalgia. This is a sample of the questionnaire and criteria survey. (links of the pdf files to be added here)

People with fibromyalgia often complain of feeling unrested, despite getting adequate sleep. Sleep is frequently interrupted by pain, and other sleep disorders, such as restless legs syndrome (RLS) and sleep apnea.

Many people who have fibromyalgia also commonly have: