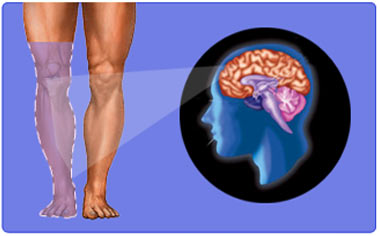 A phantom limb is the sensation that an amputated or missing limb (even an organ, like the appendix) is still attached to the body and is moving appropriately with other body parts. Approximately 5 to 10% of individuals with an amputation experience phantom sensations in their amputated limb, and the majority of the sensations are painful. Phantom sensations may also occur after the removal of body parts other than the limbs, e.g. after amputation of the breast, extraction of a tooth (phantom tooth pain) or removal of an eye (phantom eye syndrome). The missing limb often feels shorter and may feel as if it is in a distorted and painful position. Occasionally, the pain can be made worse by stress, anxiety and weather changes. Phantom limb pain is usually intermittent. The frequency and intensity of attacks usually decline with time.

A slightly different sensation known as phantom pains can also occur in people who are born without limbs and people who are paralyzed. Phantom pains occur when nerves that would normally innervate the missing limb cause pain. It is often described as a burning or similarly strange sensation and can be extremely agonizing for some people, but the exact sensation differs widely for individuals. Other induced sensations include warmth, cold, itching, squeezing, tightness and tingling.

Although not all phantom limbs are painful, patients will sometimes feel as if they are gesturing, feel itches, twitch, or even try to pick things up. For example, Ramachandran and Blakeslee describe that some people’s representations of their limbs don’t actually match what they should be, for example, one patient reported that her phantom arm was about “6 inches too short”.

Some people with phantom limbs find that the limb will gesticulate as they talk. (But whether they feel the weight of the phantom limb while gesticulating is unclear). Given the way that the hands and arms are represented on the motor cortex and language centers, this is not surprising. Some people find that their phantom limb feels and behaves as though it is still there, others find that it begins to take on a life of its own, and doesn’t obey their commands.

Treatments based on this theory were generally failures. In extreme cases, surgeons would perform a second amputation, shortening the stump, with the hope of removing the inflamed nerve endings and causing temporary relief from the phantom pain. But instead, the patients’ phantom pains increased, and many were left with the sensation of both the original phantom limb, as well as a new phantom stump, with a pain all its own . In some cases, surgeons even cut the sensory nerves leading into the spinal cord or in extreme cases, even removed the part of the thalamus that receives sensory signals from the body.

Ramachandran reasoned that if someone were to lose their right hand in an accident, they may then have the feelings of a phantom limb because the input that normally would go from their hand to the left somatosensory cortex would be stopped. The areas in the somatosensory cortex that are near to the ones of the hand (the arm and face) will take over (or “remap”) this cortical region that no longer has input. Ramachandran and colleagues first demonstrated this remapping by showing that stroking different parts of the face led to perceptions of being touched on different parts of the missing limb . Through magnetoencephalography (MEG), which permits visualization of activity in the human brain , Ramachandran verified the reorganization in the somatosensory cortex.

IV Ketamine Infusion Therapy has been shown to effectively treat Phantom Limb pain. Spinal cord stimulation (SCS) can be effective treatment for phantom pain. An electrical stimulator is implanted under the skin, and an electrode is placed next to the spinal cord. The nerve pathways in the spinal cord are stimulated by an electric current. This interferes with the impulses travelling towards the brain and lessens the pain felt in the phantom limb . Instead, amputees feel a tingling sensation in the phantom limb.

Vibration therapy, acupuncture, hypnosis and biofeedback may all be used to treat phantom pain but are often of little help. The pain can sometimes be helped by keeping busy and focusing attention on something else. Massaging the stump can sometimes help.

For planned amputation, phantom pain can be reduced by preoperative pain management, effective control of pain by analgesic or neuroleptic is required. The brain seems to implant the sensations from the preoperative state.

One particularly novel treatment for phantom limb pain is the mirror box developed by Vilayanur Ramachandran and colleagues . Through the use of artificial visual feedback it becomes possible for the patient to “move” the phantom limb, and to unclench it from potentially painful positions. Repeated training in some subjects has led to long-term improvement, and in one exceptional case, even to the complete elimination of the phantom limb between the hand and the shoulder (so that the phantom hand was dangling from the shoulder).

More recently, virtual reality has been used to combat the discomfort caused by phantom limb syndrome. Scientists from the University of Manchester have shown that phantom limb pain can be relieved by attaching the sufferer’s real limb to an interface that allows them to see two limbs moving in a computer-generated simulation. This works on a similar principle to the mirror box technique in that the somatosensory cortex is being ‘tricked’ except that the illusion is stronger.