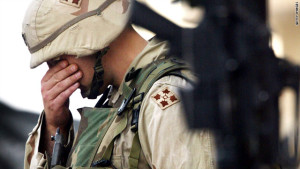 Everyone feels sad from time to time. Depression is different from just feeling unhappy or sad. Depression is more intense, lasts longer, and has a large negative impact on a person’s life. The following are the symptoms of depression (also called a major depressive episode)

According to most doctors, to be diagnosed with a major depressive episode, a person must experience 5 of these symptoms all within the same 2-week (or longer) period.

How Common is the Occurrence between PTSD and Depression?

Depression is one of the most commonly occurring disorders in PTSD. In fact, it has been found that among people who have or have had a diagnosis of PTSD, approximately 48% also had current or past depression. People who have had PTSD at some point in their life are almost 7 times as likely as people without PTSD to also have depression. Another study found that 44.5% of people with PTSD one month after experiencing a traumatic event also had a diagnosis of depression.

How are PTSD and Depression Connected?

PTSD and depression may be connected in a number of ways. First, people with depression have been found to be more likely to have traumatic experiences than people without depression, which, in turn, may increase the likelihood that PTSD develops.

A second possibility is that the symptoms of PTSD can be so distressing and debilitating that they actually cause depression to develop. Some people with PTSD may feel detached or disconnected from friends and family. They may also find little pleasure in activities they once enjoyed. Finally, they may even have difficulty experiencing positive emotions like joy and happiness. It is easy to see how experiencing these symptoms of PTSD may make someone feel very sad, lonely, and depressed.

A final possibility is that there is some kind of genetic factor that underlies the development of both PTSD and depression.

Getting Treatment for PTSD and Treatment-Resistant Depression

If you have PTSD, which could include treatment-resistant depression, it is important to seek treatment as soon as possible. The sooner you address your PTSD symptoms, the less likely they will become worse and will in turn increase your risk for depression.

IV Ketamine Infusion Therapy could be an effective treatment of your PTSD depression with very good success in ongoing trials.

Ketamine and Other NMDA Antagonists: Early Clinical Trials and Possible Mechanisms in Depression.

R-ketamine: a rapid-onset and sustained antidepressant without psychotomimetic side effects.