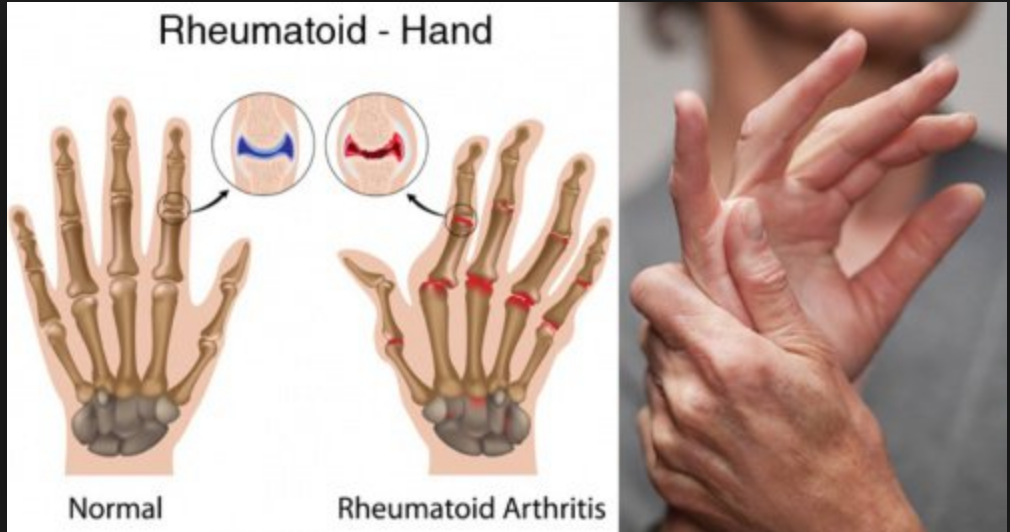 Rheumatoid Arthritis (RA) is the most common form of autoimmune arthritis, affecting more than 1.3 million Americans. Of these, about 75 percent are women. In fact, 1–3 percent of women may get rheumatoid arthritis in their lifetime. The disease most often begins between the fourth and sixth decades of life. However, RA can start at any age.

RA is a chronic (long-term) disease that causes pain, stiffness, swelling and limited motion and function of many joints. While RA can affect any joint, the small joints in the hands and feet tend to be involved most often. Inflammation sometimes can affect organs as well, for instance, the eyes or lungs.

The stiffness seen in active RA is most often worst in the morning. It may last one to two hours (or even the whole day). Stiffness for a long time in the morning is a clue that you may have RA, since few other arthritic diseases behave this way.

For instance, osteoarthritis most often does not cause prolonged morning stiffness. Other signs and symptoms that can occur in RA include:

Loss of energy
Low fevers
Loss of appetite
Dry eyes and mouth from a related health problem, Sjogren’s syndrome
Firm lumps, called rheumatoid nodules, which grow beneath the skin in places such as the elbow and hands

RA is an autoimmune disease. This means that certain cells of the immune system do not work properly and start attacking healthy tissues — the joints in RA. The cause of RA is not known. Yet, new research is giving us a better idea of what makes the immune system attack the body and create inflammation. In RA, the focus of the inflammation is in the synovium, the tissue that lines the joint. Immune cells release inflammation-causing chemicals. These chemicals can damage cartilage (the tissue that cushions between joints) and bone. Other things likely play a role in RA as well. For instance, genes that affect the immune system may make some people more prone to getting RA.

RA can be hard to detect because it may begin with subtle symptoms, such as achy joints or a little stiffness in the morning. Also, many diseases behave like RA early on. For this reason, if you or your primary care physician thinks you have RA, you should see a rheumatologist. A rheumatologist is a physician with the skill and knowledge to reach a correct diagnosis of RA and to make the most suitable treatment plan.

Diagnosis of RA depends on the symptoms and results of a physical exam, such as warmth, swelling and pain in the joints. Some blood tests also can help confirm RA. Telltale signs include:

X-rays can help in detecting RA, but may not show anything abnormal in early arthritis. Even so, these first X-rays may be useful later to show if the disease is progressing. Often, MRI and ultrasound scanning are done to help judge the severity of RA.

There is no single test that confirms an RA diagnosis for most patients with this disease. (This is above all true for patients who have had symptoms fewer than six months.) Rather, a doctor makes the diagnosis by looking at the symptoms and results from the physical exam, lab tests and X-rays.

Therapy for RA has improved greatly in the past 30 years. Current treatments give most patients good or excellent relief of symptoms and let them keep functioning at, or near, normal levels. With the right medications, many patients can achieve “remission” — that is, have no signs of active disease.

There is no cure for RA. The goal of treatment is to lessen your symptoms and poor function. Doctors do this by starting proper medical therapy as soon as possible, before your joints have lasting damage. No single treatment works for all patients. Many people with RA must change their treatment at least once during their lifetime.

Good control of RA requires early diagnosis and, at times, aggressive treatment. Thus, patients with a diagnosis of RA should begin their treatment with disease-modifying antirheumatic drugs — referred to as DMARDs. These drugs not only relieve symptoms but also slow progression of the disease. Often, doctors prescribe DMARDs along with nonsteroidal anti-inflammatory drugs or NSAIDs and/or low-dose corticosteroids, to lower swelling, pain and fever. DMARDs have greatly improved the symptoms, function and quality of life for nearly all patients with RA. Ask your rheumatologist about the need for DMARD therapy and the risks and benefits of these drugs.

Gold is an older DMARD that is often given as an injection into a muscle (such as Myochrysine), but can also be given as a pill — auranofin (Ridaura). The antibiotic minocycline (Minocin) also is a DMARD, as well as the immune suppressants azathioprine (Imuran) and cyclosporine (Neoral, Sandimmune, Gengraf). These three drugs and gold are rarely prescribed for RA these days, because other drugs work better or have fewer side effects.

Patients with more serious disease may need medications called biologic response modifiers or “biologic agents.” They can target the parts of the immune system and the signals that lead to inflammation and joint and tissue damage. FDA-approved drugs of this type include abatacept (Orencia), adalimumab (Humira), anakinra (Kineret), certolizumab (Cimzia), etanercept (Enbrel), golimumab (Simponi) infliximab (Remicade), rituximab (Rituxan, MabThera) and tocilizumab (Actemra). Most often, patients take these drugs with methotrexate, as the mix of medicines is more helpful.

Janus kinase (JAK) inhibitors are another type of DMARD. People who cannot be treated with methotrexate alone may be prescribed a JAK inhibitor such as tofacitinib (Xeljanz).

A promising treatment for the inflammatory and pain associated with RA is IV Ketamine Infusion Treatment. IV Ketamine can be given in a series of visits and results have been very positive, with patients reporting a large reduction in pain as well as less swelling and inflammation.

The best treatment of RA needs more than medicines alone. Patient education, such as how to cope with RA, also is important. Proper care requires the expertise of a team of providers, including rheumatologists, primary care physicians, and physical and occupational therapists. You will need frequent visits through the year with your rheumatologist. These checkups let your doctor track the course of your disease and check for any side effects of your medications. You likely also will need to repeat blood tests and X-rays or ultrasounds from time to time.