Title: Ketamine-induced affective switch in a patient with treatment-resistant depression
Authors: Girish Banwari, Prutha Desai, and Prahlad Patidar
Journal: Indian Journal of Pharmacology
Abstract: There is growing evidence to support the rapid, albeit short-lived antidepressant effect of subanesthetic dose of ketamine, a noncompetitive glutamate N-methyl-D-aspartate receptor antagonist in treatment-resistant unipolar and bipolar depression. Ketamine is known to cause transient mood elevation or euphoria, psychotomimetic effects, and dissociative symptoms, but its use in unipolar or bipolar depression has not been reported to induce an affective switch amounting to persistent or prolonged hypomania/mania or manic-like syndrome. We report the case of a 52-year-old male with first episode, continuous, nonpsychotic, treatment-resistant, unipolar major depression of 10 years duration, who manifested a switch from depression to mania while being treated with subanesthetic dose of ketamine, given intramuscularly. This case suggests that polarity switch should be considered as a potential side effect while using ketamine for treatment-resistant depression.
Link to Full Text

Title: Intravenous Therapies in the Management of Neuropathic Pain: A Review on the Use of Ketamine and Lidocaine in Chronic Pain Management
Authors: Harsha Shanthanna
Journal: Neuropathic Pain
Abstract: Neuropathic Pain is a term referred to “pain arising as a direct consequence of a lesion affecting the somatosensory system”. As a first line option, oral medications are mostly used, as they are easily available, relatively safe, and do not need much resources. They include antidepressants in the form of tricyclics, newer selective reuptake inhibitors of serotonin and norepinephrine, gabapentin, pregabalin etc. Although neuropathic pain conditions do share some common clinical features, they are quite diverse when considered individually according to their etiology and pathogenesis. Hence not all patients and not all types of neuropathic pain respond to such oral therapy. In practice patients are given a form of such neuropathic pain medication along with or without an opioid, depending upon the extent of pain that the patient suffers. Opioids are potent analgesics but are not a good choice for neuropathic pain conditions. With time the clinician is left with fewer alternatives and furthermore, with the the increasing knowledge that escalation of opioid therapy will perhaps lead to hyperalgesia and tolerance, it becomes necessary to explore other options. Among the other options one can always consider to explore treatment with intravenous medication such as Ketamine, Lidocaine, and Magnesium etc. This chapter would highlight the use of ketamine and lidocaine in the form of drug profile, the pharmacological basis behind its use, strategies to use, important side effects and limitations and available evidence base, including a review of randomised controlled studies. Both are considered separately in two different parts. References for both the parts are given at the end, in separate sections.
Link to Full Text

Title: Post-Treatment Lyme Syndrome and Central Sensitization
Authors: Shweta Batheja, , M.B, B.S., Jenifer A. Nields, , M.D., Alla Landa, , Ph.D., Brian A. Fallon, , M.D., M.P.H.
Journal: Journal of Neuropsychiatry
Abstract: The authors of this clinically important article describe the process whereby chronic Lyme disease and its CNS sequelae can result in various treatment-resistant pain and anxiety disorders that are characterized by hypersensitivity to noxious and non-noxious stimuli. These may include skin reactions, fatigue, muscle weakness, extreme sensitivity to sound or smell, and, also, mood and cognitive symptoms. The article reviews several treatment approaches beyond antibiotics, including antidepressants and anti-epileptic drugs.
Central sensitization is a process that links a variety of chronic pain disorders that are characterized by hypersensitivity to noxious stimuli and pain in response to non-noxious stimuli. Among these disorders, treatments that act centrally may have greater efficacy than treatments acting peripherally. Because many individuals with post-treatment Lyme syndrome (PTLS) have a similar symptom cluster, central sensitization may be a process mediating or exacerbating their sensory processing. This article reviews central sensitization, reports new data on sensory hyperarousal in PTLS, explores the potential role of central sensitization in symptom chronicity, and suggests new directions for neurophysiologic and treatment research.
Link to Full Text

Title: Review of pharmacological therapies in fibromyalgia syndrome
Authors: Winfried Häuser, Brian Walitt, Mary-Ann Fitzcharles and Claudia Sommer
Journal: Arthritis Research & Therapy
Abstract: This review addresses the current status of drug therapy for the management of fibromyalgia syndrome (FMS) and is based on interdisciplinary FMS management guidelines, meta-analyses of drug trial data, and observational studies. In the absence of a single gold-standard medication, patients are treated with a variety of drugs from different categories, often with limited evidence. Drug therapy is not mandatory for the management of FMS. Pregabalin, duloxetine, milnacipran, and amitriptyline are the current first-line prescribed agents but have had a mostly modest effect. With only a minority of patients expected to experience substantial benefit, most will discontinue therapy because of either a lack of efficacy or tolerability problems. Many drug treatments have undergone limited study and have had negative results. It is unlikely that these failed pilot trials will undergo future study. However, medications, though imperfect, will continue to be a component of treatment strategy for these patients. Both the potential for medication therapy to relieve symptoms and the potential to cause harm should be carefully considered in their administration.
Link to Full Text 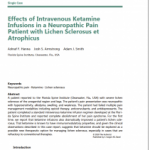 Authors: Ashraf F. Hanna, Josh S. Armstrong, Adam J. Smith
Journal: Karger Open Access
Abstract: A patient reported to the Florida Spine Institute (Clearwater, Fla., USA) with severe lichen sclerosus of the anogenital region and legs. The patient’s pain presentation was neuropathic with hypersensitivity, allodynia, swelling, and weakness. The patient had failed multiple pain management modalities including opioid therapy, anticonvulsants, and antidepressants. The patient completed a standard intravenous ketamine infusion regimen developed at the Florida Spine Institute and reported complete abolishment of her pain syndrome. For the first time, we report that ketamine infusions also dramatically improved a patient’s lichen sclerosus. That ketamine is known to have immunomodulatory properties, and given the clinical observations described in this case report,suggests that ketamine should be explored as a possible new therapeutic option for managing lichen sclerosus, especially in cases that are refractory to conventional therapies.